All about the artwork, from the artist. 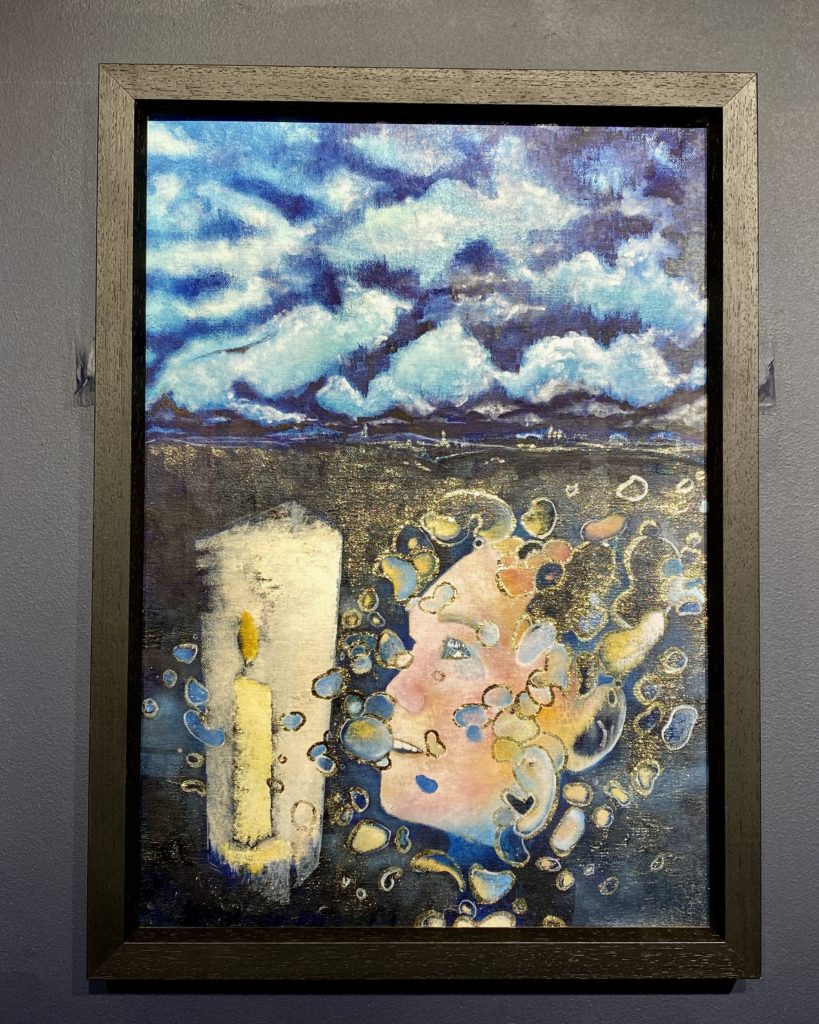 Christian Asare is a Black British Multidisciplinary Artist of Ghanaian heritage based in Manchester.

A trained choreographer, and contemporary dancer with a specialisation in afro-contemporary dance, he is also an independent fine artist, painting in oils with a focus on uplifting afrocentric imagery, afro-futurism, portraiture and abstraction.

Find Christian on Instagram by clicking the icon above.

“Though I’d been requested to portray a female face when creating this commission, I found in researching the Night workers of Birmingham, that they were a close-knit community of diverse people including men, women, Queer and Trans people. As such I wanted to paint a person who was representative of this diverse collective community– a figure that was androgynous in visage – and could just as easily be interpreted as masculine, feminine or non-binary.  I thought of how much hope lay in those wells of light in late hours of night, and how emotions like Hope, Fear and Courage could coalesce in shared spaces amidst the drone of distant warplanes –both images, the emotions coalescing, and the threat of warplanes in the night—resembled in juxtaposition; fire-flies around a naked flame. Following, I chose to name the piece ’Courage Coalesces by Candlelight’.”

I think, when examining history and doing research, it is important to acknowledge the social and political context of the era, in order to “read between the lines” as it were, to ascertain the truth of events – relative to how they may have been reported.

The lamplighters are often historically recorded (by men – mostly– of that era) as a community (lead almost exclusively by men) with an important job – to light the lamps at dusk, and extinguish them at dawn.
However, a critical cross-examination of the socio-political issues prevalent during world war two, works to highlight individuals within those communities who would not have been celebrated or popularised in the era – due to the discriminatory and derogatory nature in which Said individuals (i.e.. women,  gay men, trans people, sex workers, people of colour, etc.) would have been viewed and spoken about at the time.

Lamplighters as a community did not solely consist of heteronormative families – over 150,000 men were drafted from Birmingham into world war 2 — more than half the city’s population of men. So naturally the slack in many of those jobs was picked up by women (some of whom were also sex workers) during the blitz of 1940. Though queer people were heavily discriminated against and ostracised both in the military and in British communities, they still played as much of a role in the war effort as everyone else. Black and brown people would also have played a significant role in supporting the war effort – but would not have been reported on or credited in the same humane context as their white British colleagues, friends and countrymen.

Finding sources that report British history accurately however, will be easier said than done– because the social and political context of said era would not have publicised or reported on these individuals in the same context.

Thus, it is important that we do not buy into the socially supressed and oppressive ideals of the era – and that we join the dots, and read between the lines, so we can interpret history As it Was, not As They Tell It – honouring the unsung efforts of those forgotten, overlooked, concealed and suppressed, without whom things could have been a lot worse.