From Summerfield to Paradise: Three new artworks by Claire Cotterill 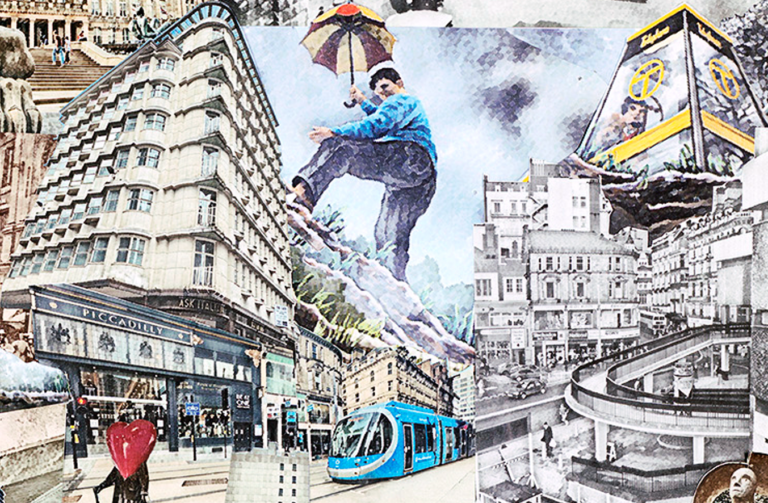 During our Community Routes project, Birmingham artist Claire Cotterill created a trio of brand new, epic collage artworks. They’re on display at the Roundhouse this summer.

Claire’s work celebrates the history, architecture and local spaces around Birmingham. Each are absolutely packed with details, and are inspired by three new tours created during our project:

Claire’s work is on display at the Roundhouse until Sunday 26 September.

You can also purchase A3 prints of each works from the Roundhouse Birmingham gift shop. Get in touch at hello@roundhousebirmingham.org.uk or via the website contact form if you’re interested.

Here’s a little info about each collage – in Claire’s own words – alongside a few snippets from each work. Drop in to the Roundhouse, so you can see them in all their epic glory. Over to Claire…

‘There is so much to share when you begin to delve into our city’s heritage and uncover these stories about people and places, these artworks just touch upon them. The self-guided audio tours, designed by local people as part of this project will inform and delight you on the way. Enjoy your travels!’

‘I’m not sure if you’ve visited Edgbaston Reservoir before, but if you haven’t you’re in for a treat! Known locally as ‘The Rezza’, this beautiful inner city sanctuary is steeped in history.

Originally a small pool named Roach Pool in Rotton Park, it was extensively enlarged by Thomas Telford between 1824-1829 to supply water to the Birmingham and Wolverhampton Levels of the Birmingham Canal Navigations.

It is home to Midlands Sailing Club, and Rowing Club, and is also home to the renowned ‘Tower Ballroom’: once a thriving Birmingham venue. This iconic meeting place opened in 1933, originally hosting a roller-skating rink as well as wrestling, boxing and dance competitions. It played host to many live bands of local and international repute and the venue is fondly remembered as a place you could met your sweetheart or even your future spouse!

The Rezza is still much loved by local residents as well as those further afield, who enjoy moments of calm and tranquility within its unique urban environment. Here people can soak up the stunning views, enjoy the sunsets and relax through the birdlife and nature around them. This place is home to runners, cyclists, dog walkers and people of all ages meandering on the beaches that are revealed when the water is low. You might even find some gardeners who give time to lovingly maintain the Orchard that was planted by local residents.

The artwork I’ve created attempts to capture the spirit of the Rezza, not only it’s unique history but it’s value in contemporary times. The artwork incorporates the collage work of local residents and weaves in the unique heritage and contemporary photography gathered through archival research.’

‘This large scale collage celebrates the history of Westside, Broad St and Ladywood, celebrating its many incarnations through time.

Once a host to many local trades and businesses, it has evolved into a thriving inner city area of Birmingham for entertainment, hospitality and nightlife, though sadly paused recently during pandemic times!

Undergoing extensive redevelopment in the 90’s and further works today, it is a beautiful place to meander through the inner city canal networks. Archival imagery from the Rum Runner and Barbarellas, where bands like Duran Duran played and were discovered, celebrate its musical heritage, alongside recently named ‘Black Sabbath Bridge’.

The artwork celebrates companies like Lee Longlands, the well-known furniture company that has existed there for over 100 years and the F & C Osler Glass company, famous internationally for its incredible glassworks and chandeliers.

Bingley Hall is featured as a key venue in Birmingham, it’s first exhibition hall and we celebrate the Prince of Wales Theatre, predating Symphony Hall and sadly destroyed by bombing during WW2.

The artwork features St Peters Church, where the ICC now stands, and The Church of the Messiah, both churches of Broad St that are no longer present.

At Fiveways, we celebrate Joseph Sturge another much loved Birmingham industrialist and philanthropist. A Quaker and Chartist, he was a key player in the anti-slavery movement and votes for the rights of the working man. The statue, designed by John Thomas still exists today and the original inauguration in 1862 was celebrated by over 12,000 people, showing how loved he was! As part of the Temperance movement, it’s said he would have limes sent over from his plantation in the West Indies and be seen handing them out to workers leaving the pubs, encouraging health and abstinence! The Fiveways clock dedicated to city coroner John Bert features, for his services rendered to Birmingham people.’

Brum Through a Lens

‘This artwork is inspired by a walk designed by West Midland Photography Collective and aims to take you on a visual journey of the route. Again, beginning at Roundhouse, it takes us along the inner-city canals past the NIA, taking a different turn through Gas St Basin towards stunning old and new inner city architectural delights.

We can see hidden treasures along the way such as the Iron Bridge, the oldest bridge in the city centre also hosting the oldest iron streetlights. We then cross Lover’s Bridge heading to the Cube and pick up local artist Temper’s ‘The Lovely People’ who continue the journey with us!

The stunning architecture of the Cube designed by Ken Shuttleworth, is a treat to see from the inside too and not to be missed. Moving down towards the Mailbox, once Birmingham’s main Royal Mail sorting office,  we can view more stunning architecture along the way and public art features to enjoy such as the lamp by Lucy Holmes and ‘Untitled Sculpture’ by Lee Grandjean.

The brutalist signal box is a must-see along the way, and a striking example of Brutalist architecture. Past the back of New St station, we head through Piccadilly Arcade, looking up again, we see the impressive ceiling mural of artist Paul Maxfield, another fantastic photo opportunity!

Walking up New Street, look carefully to see the often-missed deco architecture before heading to Victoria Square, one of Birmingham’s oldest quarters with stunning architecture all around and more public artworks such as Dhruva Mistry’s ‘The River’, locally known as ‘Floozie in the Jacuzzi’ and Anthony Gormley’s’ Iron Man’.

From here we can take in the magnificent Town Hall, it’s been a venue for events and live music for hundreds of years and Charles Dicken’s chose it to give his first public reading of an exert of ‘A Christmas Carol’ as he had a huge soft spot for Birmingham and its people.

A remarkable building amongst many here that have survived the test of time, a good place to stop and pause for a rest and soak up the atmosphere. Through Chamberlain square and into Centenary square, there’s more architecture and art, old and new to delight and back down to the canals we go to finish our loop of this fascinating part of our city.

You may pass the Prince of Wales pub, standing on its own on the way, the elephant features as it’s said that when Chipperfield’s circus at Bingley Hall took their animals for their daily exercise, an elephant caught sight of its own reflection and charged the window, much to the shock of those sitting having a quiet lunchtime pint! There are so many photographic opportunities along the way here, water reflections, shapes, patterns and form within historical and contemporary architecture and artworks.’

Claire Cotterill and the Roundhouse Birmingham team would like to thank the following people for their permission to use imagery within the artworks and for sharing their knowledge to inspire, in no particular order …

Be in the know

Want to keep up to date with Roundhouse news, including being the first to hear when we plan to open and our tours go on sale?